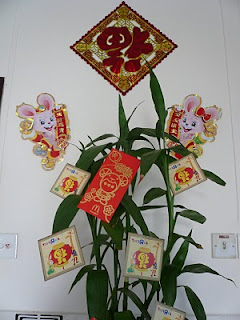 Happy Chinese New Year to you all. It's the Year of the docile Rabbit, ushering in a different kind of energy from the Tiger, but just like a bunny, it's still full of vigour.

Astrologically, we are at another new moon, which symbolises a new cycle, a new start. This time, the Sun and Moon are conjunct at 13 degrees Aquarius, the sign of unconventionality and suddenness. To add to this mix, we also have Mars, the god of war, bringing aggression and vitality. In mundane astrology (astrology of world events), Mars signifies war and violence. Globally, we have the Egyptian riots. More locally, and personally, I have encountered the police on several occasions this past week. Once at the local wet market, a couple of uniform officers were taking notes of an incident of property damage, where a butcher had to cease business for the day due to having red paint splashed all over his stall. Butchers and the colour red are governed by Mars. Then, the next day on the train, some police and train officers were trying to settle a dispute between a Hong Kong Chinese lady and a family of tourists from Mainland China, where the latter had allegedly pushed the former onto the floor in order to get seats on the train. Verbal insults ensued with lots of anger hanging in the air - all ruled by Mars again.

Thanks for all the excitements Mars!
Posted by Unknown at 00:01 1 comment: