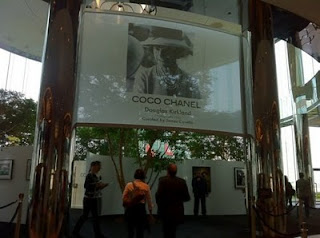 My astrology tutor said studying charts of famous people is an effective way of honing one's astrological skills. Work commitment mixed in with a sprinkle of procrastination has delayed me in carrying out this task. However, if something is meant to happen, it will, no matter what excuse is being presented. Almost a year ago, I was invited to a Chanel event which sparked my interest in analysing the chart of Coco Chanel. Attending the event allowed me to learn a lot about the fashion icon without needing to do much of my own research. http://cosmicpotential.blogspot.com/2010/04/coco-before-chanel.html

Last week, I had the great fortune of attending yet another Chanel event. It began with a photo exhibition of Coco Chanel, taken by Douglas Kirkland. In the summer of 1962, Kirkland, an American photographer, was assigned by Look magazine to shadow Chanel for three weeks. I was given an extensive tour of the exhibit by Amy Lai (Customer Relation Management manager, fragrance & beauty division). Amy was able to provide an impressive amount of information on each photo because she was lucky enough to have met the photographer a few days before.


Chanel was in her 70s when she met the 27-year-old Kirkland. From an astrological veiwpoint, the transit picture included a grand cross in fixed signs. The period in question is likely to have been significant to Chanel, which may or may not be unrelated to the encounter with Kirkland (further research needed here as there may have been something else going on in her life at the time in question).

Idealistic when it comes to creating beauty in her life (Moon in Pisces in 2nd ruled by Neptune in Taurus in 4th, which in turn is ruled by Venus. This natal Venus conjunct her Sun in Leo with an orb of 9 degrees. Her natal Moon oppose the methodical Mercury in Virgo, which in turn trine Neptune, repeating the theme of beauty and idealism, not to mention the Libra MC), Chanel was apparently a perfectionist. She would wear a pair of scissors round her neck so impromptu alterations could be made to her models' garments. Furthermore, to ensure he was good enough to take pictures of her, Chanel asked Kirkland to do a trial-run on her models before allowing herself to pose for his camera.

During the three-week period, one could see that Chanel's solemness gave way to a more relaxed demeanor as she gradually felt more comfortable in Kirkland's presence. Photography was not allowed at the exhibition, but I chanced upon the photo in a magazine, I call it 'Cheeky Chanel' (photo taken by me from East Week Magazine): 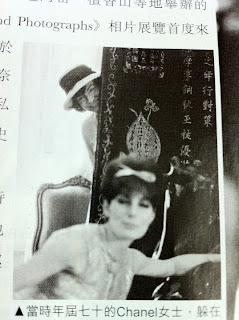 I was surprised to learn that Chanel was very much into the occults. Her displays of crystals and lion ornaments in her private office inside the House of Chanel, Paris reflected this interest. A leo, Chanel naturally had many ornaments of lions and the colour gold in her private office. This practice is still evident in some of the shops: 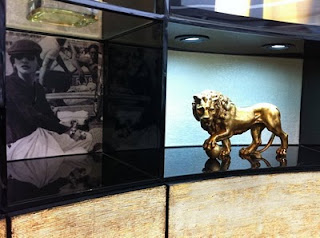 Thinking of you all

As an astrologer, my automatic response to any world disaster is to analyse the cosmic factors behind the catastrophe. However, with the recent Japanese earthquake, I found myself unable to do so straightaway. I have spent three years of my life living in Japan and it absolutely pains me to see the news coverage of the disaster. I began to get in touch with all my friends still living there, and luckily, they are all safe and sound.
We take life for granted. Those hundreds and thousands of Tohoku inhabitants were going about their lives, oblivious to the imminent danger. In the blink of an eye, their lives were turned upside down. I can still recall when my Japanese friends were reporting the news on Facebook, I had a few 'problems' playing on my mind. However, those 'problems' disappeared completely when I discovered the magnitude of the quake and what now lies ahead of Japan as a nation.
My thoughts go out to you all in Japan.
Posted by Unknown at 21:02 1 comment: