A biology professor, Roger Wotton, from University College London, examined pictures of angels and cherubs and concluded that angels are structurally unable to fly.
Of course I am not going to take much notice on that since in a previous post, I discussed how bumblebees are scientifically unable to fly.
Science is able to provide answers to world's many mysteries, but there are ones where science cannot extend a helping hand.
Posted by Unknown at 23:05 No comments:

Email ThisBlogThis!Share to TwitterShare to FacebookShare to Pinterest
Labels: Angels 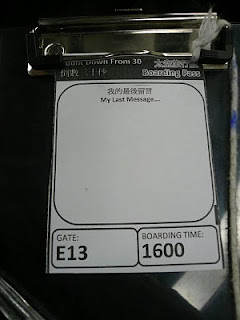 On Boxing Day, I went to visit a new tourist attraction in Hong Kong - Noah's Ark.  At first, I thought it's just another theme park with a biblical setting.  However, all the main attractions within the park have a meaningful message behind them.
One particular activity called 'Countdown from 30 seconds' involves the audience to watch a short video clip, and not to ruin it for bloggers intending to visit the park, the object of the game is to get the participants to write down a message for their loved ones when they only have 30 seconds to live.
What would be your message?
Posted by Unknown at 22:25 No comments:

With Mars beginning its retrograde motion since yesterday and Mercury on 26th, we'll be covering grounds already travelled and going over thoughts and ideas impinging on our consciousness since the beginning of this month.  With it travelling in Capricorn, perhaps our ideas are practical and materially-oriented, coupled with its backward motion, we are likely to feel more cautious with taking any overt actions.  This is especially so with Mars also in retrograde, where our energy and motivation would be turned inward.  We are more contemplative and less likely to take unnecessary risks.  Mars will turn direct again in the 2nd week of March 2010.  What did you expend your energy on back in mid-October?  This Martian retrograde period basically takes us back to that time.  Personally, that was when I was hooked up on my appearance.  I spent a small fortune on a new wardrobe to transform my face - looking at my birth afterwards I noticed Mars was hovering over my Ascendant!  No wonder I was working on a new 'mask' to greet the world!
Posted by Unknown at 11:31 No comments:

I was walking home with my cousins one night after a barbecue.  Despite being on unfamiliar grounds, I was, somehow, taking the lead and walking ahead of everyone.
'Turn right here,' one of my cousins called out behind me.
I turned right and found myself staring at a long and dark alleyway with a wall at the end of it.
'It's a dead end!'  I replied.
'Just keep walking and you'll see a sharp turning on your left,' my cousin explained.
Unconvinced, I remained rooted to the ground.  I could not possibly imagine how another road could branch off from this narrow passageway.
'Trust me!'  my cousin continued.
I took one tentative step forward, then another, all the while thinking 'This is silly, it's a dead end.....'  then all of a sudden, a side lane appeared on my left!
'Told you!'
Life is the same.  Sometimes you may go through a phase in your life where you feel/think you are approaching an obvious dead end.  But unbeknown to you, there is a way out - you may not be able to see it yet, but it is there.  All you need to do is to trust the Universe that it won't forsake you.
Posted by Unknown at 20:40 1 comment:

Doreen Virtue has posted a series of spiritually inspiring meditation videos on Youtube.com.
From releasing negativity to working on forgiveness, these powerful meditations can help you to quieten your mind so you can listen to that inner voice within.
Simply type in '4angeltherapy'.
Enjoy!
Posted by Unknown at 19:31 No comments:

Email ThisBlogThis!Share to TwitterShare to FacebookShare to Pinterest
Labels: Angels

With all the positive affirmation books I have read in the last few years, you would think that I should be an expert on putting those theories into practice.  However, just like in James Redfield's 'The Celestine Prophecy', it is hard to 'hold the vision' when you are once again dropped into the world of reality, and surrounded by materialism and skepticism of all sorts.
Just as I was struggling with the usual problems of the mundane kind, I received my monthly e-newsletter from Susan Jeffers.  The contents consisted of no new concepts, but it was a timely reminder of what I should be doing - to focus on the positive and to think loving thoughts - regardless of the situation involved.
I'm thankful for Jeffers' message on trying to work on our internal reaction instead of trying to change other people.  'One suggestion is that, instead of trying to change someone, despite how he or she is behaving, just keep silently repeating to yourself "I love you. I love you. I love you." No, I have not lost my mind. As you say these beautiful words, your internal energy starts to shift toward a very loving place. You can't imagine the profound effect it has on others when you project your love onto them!!! Try it and report back to me! As you continue to project your love onto others, you will ultimately melt into the realization that we are all human beings doing the best we can. And from this place, compassion for others...and for ourselves...is born.

Note that it's not that the behavior of others is always right; it's that we hurt only ourselves by letting their behavior take away our peace of mind. Also, we lose our ability to reach out in love when we are constantly in judgment of others. To let others be who they are and reach out to them anyway is the height of loving others. Sending "I love you" thoughts is a wonderful "reaction" to others...despite what they are doing.