I've always had a problem with controlling my anger, in that, I allow the tiniest irritant to get the better of me.
I like Louise Hay's doctrine on anger.  Louise believes that we are actually responsible for our anger seemingly caused by external factors.  Imagine an 'anger button' within each of us. Basically, we should not allow other people's words and actions to annoy us to the point that the button is pressed, triggering the anger process.
Easier said than done.  But yesterday, while I was on my way to my apartment, I overheard a conversation between two grandmas in the lift.  One said to the other 'You would never have guessed what I had to put up with today at the newspaper stand.'
I began to pray for the lift to move slowly enough so I would hear the whole conversation.
'I went to get a newspaper and told the man I was in a hurry so he would serve me quickly.  And do you know what he said?  He turned to his colleague, as if I was invisible, and remarked 'Everyone says they're in a hurry, isn't that funny?'  I was fuming hearing that but I managed to keep my mouth shut - so rude of him!'
Oh, I thought, feeling a bit disappointed.  What's the point of getting angry over THAT?  If I was in the woman's position, I would just assume the guy made a passing comment.  I personally don't see the rudeness in that.  However, that incident neatly illustrates that the anger button in each of us is pressed easier than others.  I know people who don't even seem to have an anger button at all!
I wonder what your reaction would be if you were the woman in the lift?
Posted by Unknown at 17:20 1 comment:

The Meaning of 2nd House

Each house in a birthchart represents a specific area of life.  The 2nd house is related to material possessions, one's values, self-esteem, earning power and spending habits to name but a few. I remember when I first learned about this concept, I thought it was strange how these unrelated themes are strung together and put into the same house.  Afterall, what has money got to do with personal values?
Through my work, I have learned that confident individuals are able to 'sell' themselves well, hence it has a positive effect on their earnings too.  Furthermore, according to the law of attraction, you attract what you send out.  Therefore, an individual with a healthy dosage of self-esteem is able to value oneself and can project one's self belief onto the external world.
Posted by Unknown at 21:32 No comments:

The Philosophy of Sailing 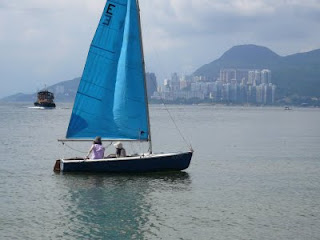 I never gave much thought to sailing in a boat.  You get in one and allow the current of the water to carry you.....or so I thought that's what happens!

My friend Jacqui invited me to visit her on Lamma Island a few weeks ago.  I was just expecting a day of relaxing on the beach, but instead, I was pleasantly surprised when I discovered that Jacqui and her husband Shane are owners of a nifty sailing boat.  Jacqui even offered to take me for a ride!  I was slightly worried initially, since swimming isn't something I feel comfortable with (just in case of accidents!), however, I couldn't make myself refuse such a great opportunity to get closer to the water so I accepted in the end.

Captain Jacqui advised that it would be best if I positioned myself in the centre of the boat and  when there's a 'knock', I would need to duck to avoid being hit by the sail.  Jacqui explained that a 'knock' is when there's a sudden change in wind direction and so the sail flips to the opposite side.  There's no use going against it but to go with the flow.  How philosophical - I can relate this in my own life too, there are times when we find ourselves in the middle of a 'knock', i.e. a sudden change, there's nothing we can do about it except to go with the flow.

We continued our journey when Jacqui began to give me a running commentary of what she was doing.  I was amazed to see Jacqui carefully observing the surface of the water - 'The patch of water in front is still', 'Let's catch the wind on the left'.  I used to think sailing was a haphazard activity!  Jacqui went on to say that on detection of a wave ahead, it would be easier to face it rather than avoid it.  It looks ominous but once you're in the middle of one, it wouldn't seem so bad.  Jacqui was very confident with what she was doing so I put complete trust in her as we glided towards the turbulent patch of water.  Again, I noticed the connection between sailing and life - an approaching wave, or obstacles in life, may appear to be threatening, but face it with courage and you will find it isn't as scary as it first looked.

Thank you Captain Jacqui for such an insightful journey!
Posted by Unknown at 20:17 3 comments: