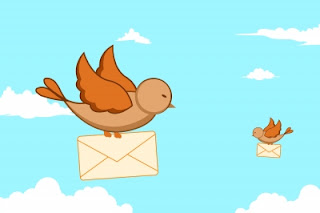 Often, I hear people around me complaining about their wishes not coming true.  They have 'sent' their wish list to the Universe and eagerly await for the results to deliver.  Besides the fact that the wish may not be for the highest good, there are other factors to consider.

While listening to Doreen Virtue's radio show last week, I picked up some useful analogies which I want to share them with everyone here.

Telling the Universe what you wish for is like sending a letter.  You must letter go of the letter in order for it to be delivered to its designated recipient.  If you hold onto the letter (i.e. not letting go), then the letter won't get delivered.

Communicating your wishes with the Universe is also liken to ordering in a restaurant.  You make your order then sit back and relax while you wait for your food.  You do not give your order to the waiter, then march into the kitchen to tell the chef how you want your food cooked exactly.  Just like you do not tell the Universe in specific details how you want your wish to be granted, perhaps a few general criteria could be helpful, e.g. for the highest good, to feel happy, so in the restaurant analogy, it would be like requesting to have your steak served medium/rare/well done.

Give the Universe time to set your wishes in place.  Your wish may involve another person, and unless that individual is ready, the wish cannot be fulfilled.  Divine timing is the key.  Having patience is another important factor - I'm the worst person to preach this being such an impatient soul!  But this is like gardening, where the seed has germinated in the soil but our eyes cannot detect this minute growth.  I remember back in primary school, everyone in my class was given a seed by our teacher.  She told us to get a pot, water it as necessary and bring it to school in a few weeks to see how everyone had done.  Being impatient, I dug up the seed everyday to check its growth!  Needless to say, my seed did not germinate at all because I was not able to let it do its own growing.  We simply need to have the patience to wait for the shoot to push through the soil and into the light.

I find it rather amazing that the same stimulus could elicit a myriad of responses in different individuals.
You and I may smell the aroma emanating from the wooden furniture in our bedroom or the woods by our house and thought nothing much of it.  Perhaps we would feel relaxed to breathe in those scents? But who would have thought to capture and transfer that smell to a perfume bottle?  That was one of the interesting facts I acquired from my recent invite to a perfume exhibition courtesy of Chanel.
Being an astrologer, I couldn't help but wonder the astrological factors possessed by Coco Chanel.
Using my Solar Fire Gold program, I discovered that Chanel was a Leo with a Pisces Moon and Sagittarius rising.  This interesting fire-water mixture is likely to create an individual with an urge to express one's individuality and put oneself under the spotlight (one of her quotes being 'In order to be irreplaceable one must always be different.').  Life is like one big adventure, waiting for brave souls to explore ('Success is often achieved by those who don't know that failure is inevitable').  There is a conflict between asserting one's identity and striving for personal recognition, and wanting to be gentle, feminine and selfless.  Her Sun conjunct Venus is also another factor which allowed her to stitch her name into the bible of fashion.
Liberating women from tight corsets by introducing 'comfort' into garments for ladies, Chanel made her mark with her signature 'little black dress' and 'Chanel suit', bringing out beauty without discomforts.  Being the first perfume to bear the name of the designer, the olfactory creation 'Chanel No. 5' perfume endowed Chanel with timeless fame.  These achievements certainly had satisfied her Leo Sun.  Her Pisces Moon could also be glimpsed by the fact that her textile products allowed women to show-off their femininity without physical discomfort and restriction.
Chanel remained unmarried in her 87 years of mortal life but had numerous affairs with influential and powerful men (Sun conjunct Venus in Leo in 8th; Jupiter in 7th).  When asked why she did not marry the Duke of Westminster, her replied was 'There have been several Duchesses of Westminster, but there is only one Chanel!' 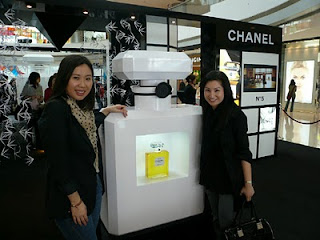 My recent trip to my local hair salon endowed me with an entertaining concept.
Six months ago, I finally had the urge to invest time and money on revamping my appearance (not the permanent kind!).  I changed my wardrobe and even attended make-up classes.  On consulting my chart, I discovered that my first make-up class coincided with transiting Mars conjunct my Ascendant in Leo.  So I expended energy on 'me', in particular, my appearance.  I also spent a lot of my time exercising to tone up my body (the first house rules our physical body and appearance).  With Mars in retrograde, the effect of my egocentric focus was prolonged  (and currently still in effect).
Practice makes perfect.  As a student, I focused my entire energy on my academic work, therefore, I was less than a novice when it came to beautifying myself.  Being an all or none person, I decided to speed up my learning process by giving myself plenty of opportunity to practice by waking up an hour early every morning to put on make-up (this 'mask' is also a first house symbol!).  My current work colleagues noticed the change and some of them disapproved of me wasting my time on 'painting' my mask.  Instead, I was advised to spend that time in bed.  'Who are you trying to please anyway?'
'Me,' was my reply, come to think of it, that is also a first house concept! Not to mention very Leo too.  I explained that I did not like what I saw in the mirror and besides, I just felt the urge to do it.  It felt right.  I have learned long ago to follow my heart.
I shared this with my hairstylist.  The first thing he said to me was 'Don't let your environment influence you.  Be the one to influence your environment.'  He then shared a psychological experiment involving the placement of an expensive car in a deprived area of New York and in a more affluent residential area.  The car was completely taken-apart in the former setting but was left unscathed in the latter.  The psychologists then repeated the experiment by replacing the cars with a cracked window.  The same outcome occurred in the former case, i.e. dismantlement of the vehicle.  However, in the latter case, having a crack in one of its windows caused a different result - the car was disassembled as well.  This simple experiment illustrates that one can influence one's surroundings.  You can be that change.  My hairstylist commented that instead of listening to my colleague and be affected by her advice, I should continue to do what I do and begin to notice changes in them instead.  Thinking back though, I think they also played a part in changing me - I remember feeling like a rag initially, so perhaps I was affected by my environment after all?
Posted by Unknown at 07:58 No comments:

It is too easy to forget the true meaning of Easter, hidden behind all those chocolate eggs and fluffy white bunnies.  In the Christian faith, Jesus died on the cross for all us sinners.  His resurrection three days later symbolises hope and rebirth.  Perhaps after indulging in all the goodies, we could spend a moment to ponder on things we could release/give up, just like Jesus had given up his mortal life for us.  Life is cyclical, as one door closes, another opens, what do you need to welcome into your life?
Posted by Unknown at 21:08 No comments: