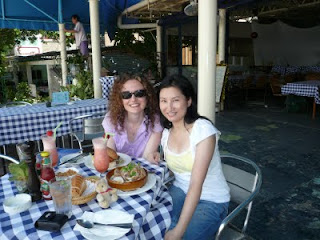 Oliver Wendell Holmes Jr. once said 'A moment's insight is sometimes worth a lifetime's experience.'
I could not agree more.
Earlier this week, I trekked all the way to Lamma Island to see my spiritual friend Jacqui.  I still find it a miracle to have met another reiki practitioner outside the reiki circle and in Hong Kong of all places!  Having been here for a year now, I am finding this place vibrationally low so to become acquainted with Jacqui is a real god-send.
During my visit, we talked about best friends in our lives.  I mentioned that Suni, my spiritual sister whom I met while working in Japan, was someone I felt totally comfortable in disclosing my secrets to.  I never worry about being judged by her at all.  Jacqui said it was because Suni and I were at peace with one another.  Neither one of us felt the need to out-do the other.  In essence, we are at equilibrium in terms of our personal power.  Such simple words, but all of a sudden, I felt a big knot in my physical body being untied.  In the past few years, I have been enmeshed in many power struggles with quite a number of individuals.  Having the tendency to assign meaning to my encounters, I attributed those experiences as important life lessons - which they were, however, the fact that I kept on being caught-up in those kinds of situations meant that I still had to make sense of the purpose behind them.  Is it to make me more assertive?  More tolerant?  More forgiving?  More confident?  Perhaps it's all of the above.   Thinking back to my previous power struggle episodes, I've identified 'insecurity' and 'jealousy' as the main reasons for my opponents' attacks.  Since they were supposed to be mirroring my internal state, I also have to watch-out for times when I get insecure and feel jealousy bubbling in my psyche.  Thanks to Jacqui's insightful words, I now know how to step out of the boxing-ring and not fight with all my might.  Instead, I should just step inside the eye of the hurricane and isolate the calmness within myself and use the Universal energy of love to transmute and redress the power imbalance.
Posted by Unknown at 23:40 No comments:

My sister forwarded me an article on the BBC News website, which I thought was interesting in response to my previous post on cultural differences.
The researchers have found that East Asians are more likely to focus on the eyes when reading facial expressions in comparison to their western counterparts, whom are more likely to scan the whole face - including the mouth.  This is extended to emoticons, where the eyes are exaggerated in the east compared to the mouth in the west.
I'll let you read it for yourselves on http://news.bbc.co.uk/2/hi/science/nature/8199951.stm
Posted by Unknown at 18:50 No comments:

Having been working in Hong Kong for a year, plus the fact that I was born here, I thought I had an upper-hand in understanding how a traditional 'Hong Konger' feels and thinks compared to a random foreigner without any links to this place - how wrong I was...
I've always heard that the locals here could tell whether a Chinese person is born and bred in Hong Kong or not.  Apparently, Chinese born or bred elsewheres have this 'dumb' look about them, that they don't look very street-wise.  I still remember over a decade ago, I came back to Hong Kong for a short visit and was put under this category.  Needless to say, I wasn't very flattered to be labelled as dumb but what can you do?  I wasn't planning on returning so I put it out of my mind. A few years ago though, I came back again for another brief visit, this time, I really liked the place.  People could still tell we're from overseas but only because of our 'friendly aura' and our non-Chinese looking noses!  It was, overall, a much more positive experience this second time round.  So much so that I decided I could work in this place - and here I am now!
I discovered how much I had been 'Hong Kong-ized' when I returned to England for a break and found myself ignoring shop assistants greeting me.  I've been so used to not making eye-contact with people (especially those giving out leaflets on the streets!) and putting on this hostile face (to ward off con artists - no joke, they are everywhere here - don't say I haven't warned you!) that I carried this defensive behaviour home.  Fortunately, it didn't take me long to pack those barriers away. I soon got used to smiling to strangers again (namely shop assistants and grannies around town!). But now that I'm back in Hong Kong, my mask is back on when I venture out..
So that's on the outside, what about the inside?
My decision to relocate to Hong Kong was met with praises and encouragements from my British friends:  'Go for it!', 'You're so brave!' Unfortuantely, the story is very different on this side of the world.  Only the other day, from a conversation I had with a neighbour in the village I moved out of a few months ago, I learned that people there thought I relocated to Hong Kong because I couldn't find a job in the UK!  I was shocked!  How could they think of such a thing (i.e. to think the worse in others)?  I wasn't a fresh graduate nor an unemployed soul - but then, how would they know?  So I put her straight.  Mind you, I don't think she believed me - some people here just do not understand the concept of giving up a stable job for the unknown - well, I'm a living example!
Universe, please open the minds of these people...for their own sake!
Posted by Unknown at 23:09 No comments:

One of the side effects of the Credit Crunch is redundancy. I have been incredibly lucky so far and hope that those around me who are made redundant will soon find another source of income, or at least, understand why it has happened to them.

Although I have never been made redundant before (touch wood :P), I have experienced a period of unemployment in the past.

I returned to England from Japan six years ago and spent the first month enjoying myself, not worrying about my future. Towards the end of the month though, my carefree attitude began to evaporate. At the time, I wanted to leave teaching and explore another line of work. I didn't know exactly what I wanted to do, but the thought of working with international students, helping them settle into living in Britain appealed to me. After all, having lived alone in a foreign country, I completely understand how important it is to receive support from the locals. Thus I sent that wish out to the universe and began to wait for a reply, albeit rather impatiently.

Instead, I received another message through an old school friend. To cut a long story short, I was guided back onto the teaching path. I then made the necessary research and sent in the required application.

All in all, I was unemployed for four months.

During that period, I fervently asked for universal guidance. I was thrown into a cocktail mixture of frustration, irritation, depression, exhilaration and finally, gratification. On hindsight, I should have put my complete trust in the universe and allowed events to unfold in its course.

I know it may seem easy for me to say to my unemployed friends to keep their spirits up and to appreciate the fact that the universe has better plans waiting for them around the corner, but I have been through a similar experience - I can honestly say that I have learnt from my four months of unemployment hell all those years ago. Last year, I had the sudden urge to give up my stable job even though I didn't have another one to go to. Luckily, something did turn up before the end of my contract. The new job turned out to be a complete nightmare - but it was a necessary life lesson for me because I learned so much about myself and had gained a phenomenal amount of self-confident from the experience. Yet again, I resigned - for the second time in the same year, and right in the middle of credit crunch. Most of the people around me thought I was mad to make the move, but for once in my life, I was overwhelmed by a sense of trust in the universe. It just felt so right to move on, despite all the surface tensions and struggles. The universe did not forsake me. I secured another job within a week - it even fulfilled all of my wishes I had asked for!

I do strongly believe that everything happens for a reason. On the surface, it may seem traumatic, but if you dig deep within, you will find the required tools to overcome those obstacles thrown in your way.
Posted by Unknown at 18:53 1 comment:

In my early days of being acquainted with Doreen Virtue's work, I remember coming across her explanation of being 'empowered'. This is basically having the confidence in yourself and not giving your power away.
Easier said than done.
I found it even more difficult to practice it when I come to understand that blaming others for our unhappiness is considered to be giving one's power away. Thinking back to Louise Hay's work, I guess it is true, because Louise mentioned that we have the power to not allow others annoy or irritate us with their words or actions. So even if we do come face-to-face with bullies and become upset, we cannot say 'X really annoyed me. It's all his/her fault.' What we need to say is acknowledge X's behaviour as unacceptable and then give the pain to the divine for transmutation. I personally like to think that it's just another lesson for me to learn about another aspect of human life, e.g. tolerance, acceptance. I release the pain associated with the event in question, asking the divine to help me extract the lesson then move on.
Posted by Unknown at 17:40 No comments: